Citizens4Change
By Bob Robinson
“We intend to be proactive, not reactive,” said Citizens4Change co-organizer Kathy Beam at their Town Hall meeting Saturday morning at Greenville Park. Over 100 people attended. 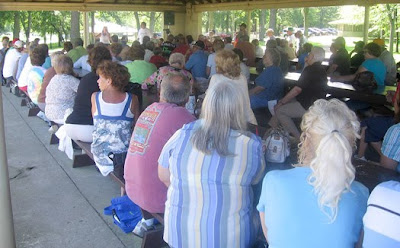 The group met over the homes John Graham is using to house released sex offenders in the concentrated residential area of East Main, 3rd Street and Ludlow.
She said the group had four goals: an action plan for change, inform residents of the needs of the community, become big enough to bring about change and to celebrate change when it has been accomplished. 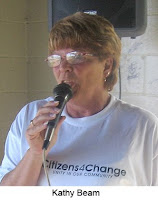 “I’m not against sex offenders,” she said. “I’m against them being in a residential community around our children.”
She added that the group was not just about the current controversy but would also be addressing other problems in their community. The drug problem was noted as an area of concern. 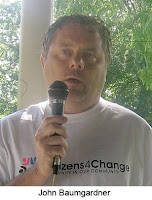 The action plan was detailed by co-organizer John Baumgardner. It included making sure that local ordinances were enforced, writing letters to media outlets and representatives, letting those who support Graham’s program know that there are better ways to help the community, and seek donations so an attorney could be hired to challenge the program.
“We need to make the community a place where people want to live,” he said, adding that they are losing good people and replacing them with bad people.

Baumgardner noted that they had walked the area and could only find one resident who supported Graham’s program. The rest were against it.
Several community residents spoke following Beam’s and Baumgardner’s presentations. Some noted inappropriate behavior from the offenders, including watching their kids and whistling at one of the mothers. All expressed concern over their safety or the safety of their children. Many noted that they were unhappy that what started out to be a homeless shelter has now grown to a program that works with felons and sex offenders.
The meeting was orderly and strong emotions were evident in the faces of those who attended. There was one sour note, but it happened before I got there.
I received an email from someone who supported Graham’s program. He said he had been asked not to put up signs or pass out flyers, to which he agreed, but then was asked to leave. I contacted Baumgardner. He said the individual was not asked to leave, only that he not set up his signs since they opposed the group’s purpose.
More to come.
Bob Robinson is the retired editor of The Daily Advocate, Greenville, Ohio. If you wish to receive his opinion comments by direct email or receive notification when a blog is posted, send your email address to: opinionsbybob@gmail.com. Feel free to express your views.
Posted by That's My Opinion at 3:45 PM

Newer Post Older Post Home
Subscribe to: Post Comments (Atom)
Check for my daily posts and feel free to respond. I'm looking forward to hearing from you. You may use a pseudonym if you aren't comfortable using your name, but Anonymous comments will not be published.

That's My Opinion
I was managing editor of The Daily Advocate, Greenville, Ohio for seven years. I currently write a weekly column as its Editor Emeritus. What little spare time I have is devoted to my family, community service, Kiwanis and Key Club International, Greenville FOE and VFW, and teaching technical writing and computer graphics at Edison Community College, Piqua, Ohio.