Bits & Pieces - Who will sit there in January?

Who will sit there in January?
Bits ‘n Pieces
By Bob Robinson
The power of the pen. No sooner had I posted my earlier blog than I had the photo. However, Advocate reporter Tony MacKenzy said I was supposed to give him my email address, which I thought he had but evidently he didn’t. He got it from Tina Chalmers, his Editor. The caption on the email was “That wasn’t the deal, Bob.”
I was also told I can “use it for whatever sundry purposes you might have in mind.”
I’ll take your word for it, Tony, and I apologize. I also thank you. The only sundry purpose I have in mind for the moment is this blog, but I’ll file the offer for future reference. The photo is a kick. Here it is, folks… 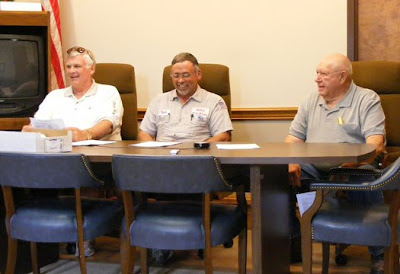 So who WILL sit there in January? Only one of them, but they got a taste of the furnishings – if only briefly – on Monday afternoon. Left to right, Republican Candidate Mike Stegall, Independent Candidate Keith Smith and Democrat Candidate David Niley. Think they’re having fun? Note who is holding the paperwork… ready to get down to business.
I had a great time campaigning to be one of those individuals… but I’ve got to be honest. I’m having more fun as a Watchdog and Citizen Activist than I ever did as a candidate.
Who said retirement was for rocking chairs?
Bob Robinson is the retired editor of The Daily Advocate, Greenville, Ohio. If you wish to be notified when a blog is posted, send your email address to: opinionsbybob@gmail.com. You may also request to receive his That’s My Opinion and Verities or Balderdash columns by direct email.
Posted by That's My Opinion at 12:46 PM

Newer Post Older Post Home
Subscribe to: Post Comments (Atom)
Check for my daily posts and feel free to respond. I'm looking forward to hearing from you. You may use a pseudonym if you aren't comfortable using your name, but Anonymous comments will not be published.

That's My Opinion
I was managing editor of The Daily Advocate, Greenville, Ohio for seven years. I currently write a weekly column as its Editor Emeritus. What little spare time I have is devoted to my family, community service, Kiwanis and Key Club International, Greenville FOE and VFW, and teaching technical writing and computer graphics at Edison Community College, Piqua, Ohio.